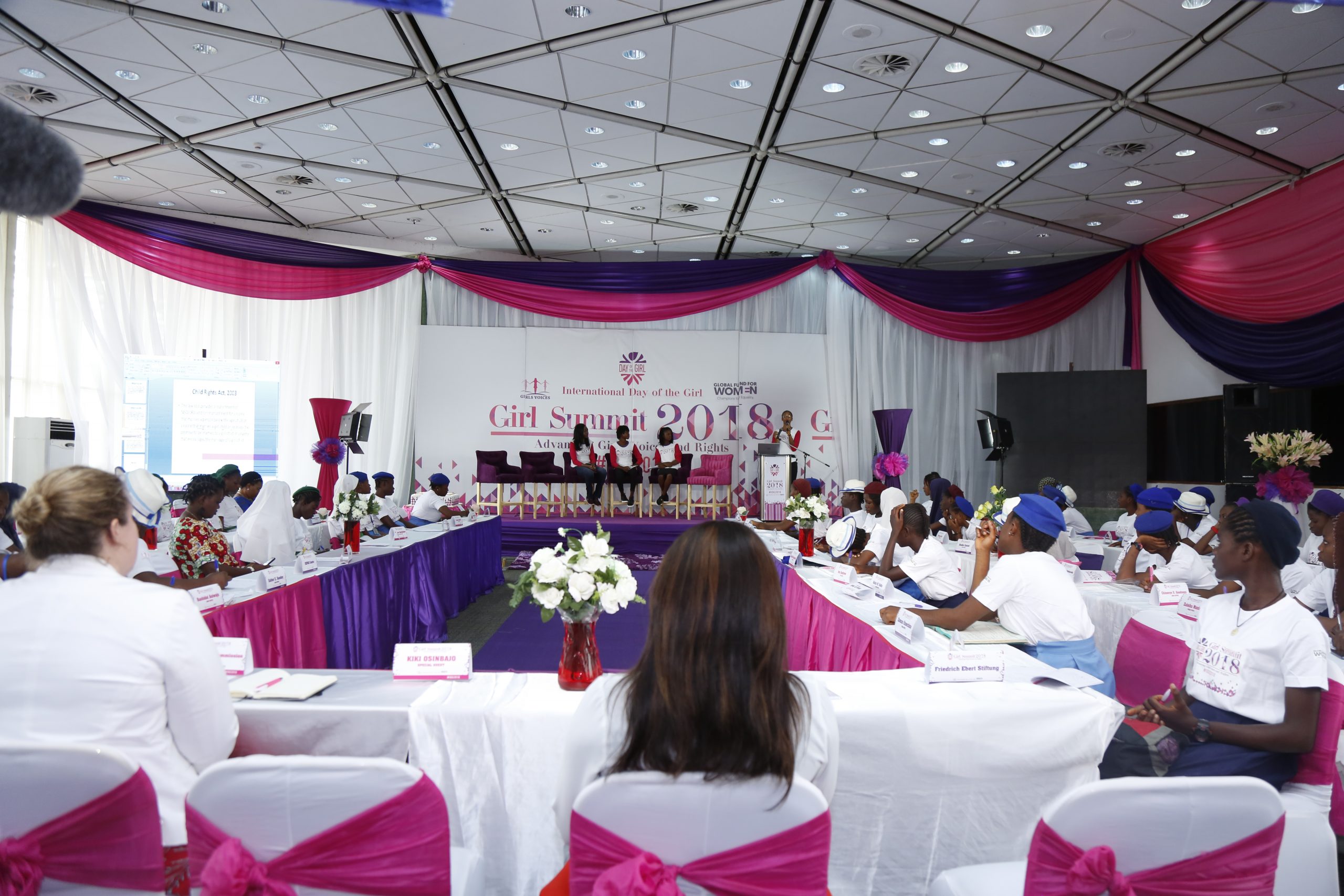 The Girl Summit 2018 was organized in celebration of the International Day of the Girl 2018. The theme of the Summit, ‘Advancing Girls’ Voices and Rights to End Child Marriage, End Gender-Based Violence, and Promote Girls Education’ was targeted as a follow-up to series of projects that our organization had engaged girls in Nigeria’s public school system to educate the girls about their rights, support them to explore technology, media, and art as tools to promote girls’ rights advocacy. The Summit sought to scale the impact of the Girl Summit 2016 launch. The Summit was implemented on October 12, 2018 with support from the Global Fund for Women.

The Girl Summit 2018 event pooled together a rich representation of girls from government secondary schools in the city and there was a good representation of girls with disabilities as well as vulnerable girls from internally displaced camps in the northeastern region of Nigeria which has suffered the boko haram insurgency since 2009. The Girl Summit hosted two hundred and five (205) delegates comprising senior and junior secondary school students (126 schoolgirls) from the Federal Capital Territory (FCT), and girls from Adamawa, Borno, and Niger states of Nigeria as mobilized from other Global Fund grantee partners. Other delegates at the event included the teachers representing each of the schools and chaperones for the participating schoolgirls, representatives from government agencies, civil society, development partners, diplomatic missions, and the media. The Summit's welcome remarks were presented by the Board Chair of Girls Voices Initiative, Mrs. Titi Fakoya, and the Founder & Creative Director of Girls Voices Initiative, Mrs. Carolyn Seaman. Additional welcome remarks were presented by a representative of the FCT Universal Basic Education Board, Mrs. Nafisah Kote and the Special Guest from CNN Africa, Ms. Stephanie Busari who also delivered a presentation. The Summit was declared open by the daughter of the Vice President, Miss Kiki Osibanjo, who also delivered the keynote address. There were various presentations and panel discussions involving girls and influencers from the Police, the Media, and Civil Society represented at the Summit event.

Video highlights from the summit

The goal of the Girl Summit was to mobilize girls' voices across Nigeria and strengthen the girls' movement to champion advocacy on these issues through presentations, panel discussions, questions and answers, and demanding Nigerian Political Parties to articulate their manifestos and what it presents for girls in the upcoming 2019 Nigerian General Elections. The girls displayed their capacity to hold politicians accountable and responsible for delivering on their promises to advance girls' rights if elected to power.

Remarkable presentations were delivered by Girls Voices Girl Leaders on the thematic issues; Ending Child Marriage, Ending Gender-Based Violence and Promoting Girls Education. Also, the Head of CNN Africa Bureau, Ms. Stephanie Busari, delivered a presentation entitled, 'Spotlighting Girls’ Voices and Rights through the Media: Opportunities and Challenges'. The panel session on, 'Taking Action in cases of Gender-Based Violence' featured speakers from the gender unit of the Nigerian Police, the state chairperson for the International Federation of Women Lawyers (FIDA), and CSO representations from the Sexual Offences Awareness & Victims Rehabilitation (SOAR) Initiative and Girls Voices Initiative. The Daughter of Nigeria's Vice President, Miss Kiki Osinbajo, delivered the keynote and shared her journey to fulfilling her passion as a girl and inspired Nigeria's girls to prioritize their education and always strive to do what makes them happy and fulfilled in life. And the Executive Director of Education as a Vaccine (EVA) Nigeria, Ms. Buky Williams, delivered a presentation entitled. 'My Body, My Rights: Sexual and Reproductive Health and Rights for Adolescent Girls'. The girls engaged actively through the entire event and the team of girls on the communique team contributed to the development of the Communique of the Girl Summit 2018.