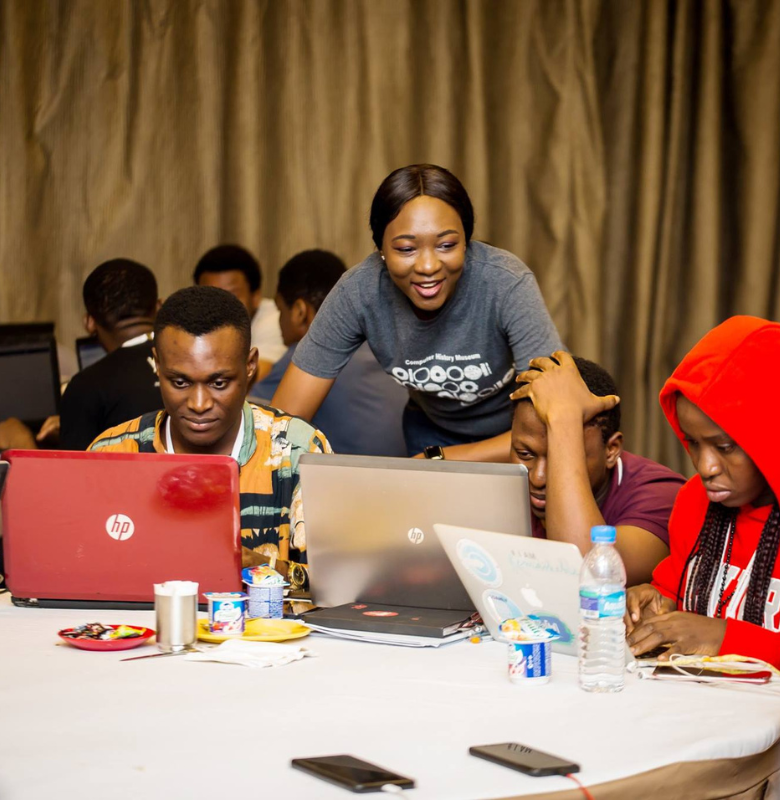 The Hackathon for Justice was a collaboration between Africa Teen Geeks in South Africa, Facebook London and the United Nations Office for Drugs and Crime (UNODC). Girls Voices Initiative joined the partnership to support the 24-hour hackathon and document the project in photos and videos.

Hackathons are a very important piece of our culture of empowering girls to innovate ideas and solutions to problems affecting them. Our partners, Africa Teen Geeks and Facebook also have the longstanding tradition of powering hackathons where engineers and developers stay up all night to create working products or prototypes from scratch. In 2012, Facebook scaled their hackathon program to different regions around the world and supported the #Hackathon4Justice in Lagos in 2019. Young developers stayed up all night hacking, learning, and having some fun!

The hackathon event was preceded by an iterative process of consultation, definition, and refinement. These processes identified significant challenges in the drugs and crime sector judged amenable to technology solutions. They were then reframed in a way that allowed computer programmers— often unfamiliar with the drugs and crime sector—to understand and address them directly, and the response was enthusiastic. The iterative process of defining pressing problems also brought to the surface existing and nascent innovations and young innovators. The hackers were expected to hack along the UNODC Education For Justice e4j-inspired challenges:

Challenge #2 (Human Trafficking): Designing a tech solution that enables relatives, family, friends, or any other person who is/was in touch with the victim to help them recognize and escape their plight. It could be something that helps a witness identify a potential human trafficking case.

Challenge #3 (Transnational Organized Crimes): Designing solution that will enable e-waste to be recycled or disposed of in accordance with international and national laws – without endangering communities and the environment or even in a way that is beneficial to society.

Challenge #5 (Crime prevention and Criminal Justice): Designing a tech solution to improve justice for children and to ensure that children are better served and protected by the justice system, including the security and social welfare sector.

Challenge #6 (Corruption): Designing a solution that could act as a sort of i-report that allows people from different parts of the country to contribute/lay complaints about their corruption experiences (with options to send pictures, voice recording and/or videos).

Teams and mentors worked hard, some almost without any breaks, to advance projects as far as possible within the 27 hours of the hack. Quite a tight time limit for the teams to code, but after the hacking ended, the teams had some more time to prepare their short presentations to be delivered in pitches of 3 minutes each. The hackathon teams were judged based on the criteria of originality & impact, user experience/functionality and technical difficulty. The judges panel comprised representatives of Africa Teen Geeks, Facebook, UNODC, and the Nigerian Government. The first prize was an all-expenses paid trip to San Francisco, the second prize was the Oculus Rift virtual reality goggles, and the third prize were branded backpacks.

Team Athena, the first runner-up of the Hackathon developed a mobile application that allows people to report crime incidents and lay corruption complaints with just a few clicks while protecting the identity of whistle-blowers and educating people about their rights. They won the Oculus Rift virtual reality goggles.

Team LFT (Let’s Fight Trafficking), winners of the Nigeria edition of the global Hackathon For Justice: David Popoola, (400 level), Miss Chukwudumebi Onwuli, (300 level) and Eyitayo Ogunbiyi (400 level) were students of the University of Lagos, who developed a web application that provides both trafficked victims & their loved ones with knowledge and access to tools to prevent Human Trafficking.

The quality images and videos produced by Girls Voices Initiative attracted global attention, especially on social media and the internet. Proud of our partnership with Africa Teen Geeks, Facebook and the UNODC, we committed to advance the initiative to deliver for high school girls with the Girls Hackathon4Justice implemented with high school girls in Abuja to enable the winning team to participate in the global hackathon in August.